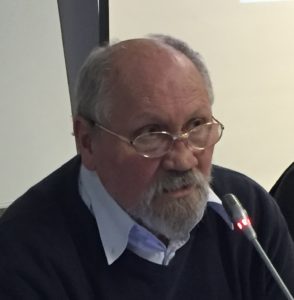 A CALL FOR UNITY

We people from different movements coming together at the seminar against EU-politics for … call for unity. We have different ideological back grounds but see the need in finding common ground. People from the countryside and the cities, the periphery of Europe and unprivileged at the core needs to see interests that unites us in global solidarity with the rest of the world and coming generations.

The EU-politicians wants the opposite. Instead of solving the social and ecological crisis due to a development model built on ever growing debt they try to sell the same trick again they tried before. They claim that finally they will make the social promises come true once made to streamline the EU according to the interests of corporations three decades ago to . This is why heads of states gathered at the Social Summit for Fair Jobs and Growth for the European Union held in Gothenburg the 17th of November 2017.

The very start of the European Union was here in Gothenburg in Sweden in 1983. The boss of Volvo at that time, Pehr G. Gyllenhammar with their HQ in Gothenburg initiated the European Roundtable of industrialists, a still influential group of corporate leaders that made the blueprint for turning the earlier European economic cooperation into the EU. Also then was the corporate project whitewashed with talks about a social dimension while in fact the corporate stratgey for social cuts was implemented.

Shaped by the Rome treaty from 1957 giving privilege to market economy as a value above other values the result has rather been a new way to organize colonial relationships changing from direct political control to economical. A kind of neocolonial rule shaped by international trade and finance treaties prolonging the present Western dominated world order. A kind of neocolonialism enabling the center to exploit the periphery also within the EU both at the domestic level and between EU membership countries. The treatment of Greece is a clear expression what the centre of the EU is willing to impose upon the periphery. Now the right of workers are under attack while at the same time family farmers and others working under precarious condition of perfect competition find themselves under similar pressure to reduce their income from wages or other forms of (renumeration). In order to maintain its privileged position in the present world order EU now also centralize and start militarization and armament in close cooperation with NATO.

This role of the EU has to be questioned. Therefore, we have organized an alternative summit where we share, discuss and develop different aspects we find important to take into account when it comes to establish a political and economical system that serves people and not the big corporations and a state serving their interests.

At the core of the seminar Another Europe is possible during the Alternative Summit is the understanding that the present political and economical conjuncture calls for unity between those working under perfect competition and wage earners. Whether working in the fields to grow food for all of us or in the factory or service there is a need of understanding of common interests. We all have a stomach and have to understand that the economy has to be regulated. That has to be done in such a way that agriculture with its lack of scale advantages that industrial production have must get the possibility to flourish as well as industry and service at the cost of financial interests. Equally important is a unity across borders to oppose wars, armament and militarization of the EU and tis ever growing closer ties with NATO.

Peasant movements and trade unions, refugee and peace mopvements, rural and urban, antiracist and feminist, social and ecological movements have to unite in a common struggle against false solutions and for constructive solutions as a just transition were each society can have a fair share of the natural resources on Earth.

Although our fights and struggles take different shapes and colors depending on our focus, we share the view that the points underneath are root causes of our social, political, economical and environmental situation:

–       The EU capitalistic model has developed its economical project through deregulation, privatization and opening the markets with treaties and agreements that mainly focuses on production and consumption growth to enrich large companies and corporations.

–       Democratic institutions are undermined by authoritarian tendencies: Western countries have more and more gone into a representative democracy that  begins and ends with the right to vote. Citizens are only seen as people with right to participate in the political area when it is election time. The European Union has also taken core decisions further away from the people.

–       Colonial framework: Western nations have a long history of colonization, both within the European Union and outside. To understand and take into consideration the privilege status of some western culture and some European nations is core to start taking responsibility for the colonial legacy that continues to reproduce unequal power structures.

–       Racism and patriarchy: as grounds of oppression, racism and patriarchy needs to be seen as core instruments of the colonial and capitalistic agenda. Dualistic views serve as arguments for the hegemonic forces when they want to strengthen border controls and immigration, for example.

–       Extractivism: the current western culture is based on an idea that humans are above the rest of the nature. This core belief has pushed a model that not only inconsiderably extracts materials from Mother Earth, but also (and by doing so) separates humans from having real, loving contact with nature.

–       Militarism: the current promotion of enemy images and the militarization of societies has to be replaced by promoting both peace on earth and peace with earth.

We stand for: Include: Buen Vivir, Swarag,

–       Return to an idea of common security: sharing common values.

Therefore we participate in:

–     Conferences on agriculture and forestry as well as food sovereignty week in Sweden.

Remark: Here you can watch some videos about the counter-EU actions we made