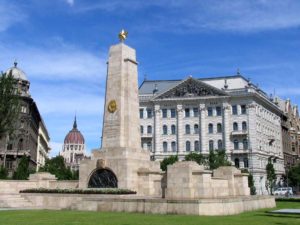 On May 24, a meeting between the Hungarian Foreign Minister Peter Siyarto and US Assistant Secretary of State Wess Mitchell took place. During the conversation, the Hungarian Minister reported on sending the NATO Secretary General a document on Ukraine. The Hungarian Foreign Minister said a certain high appreciation of the United States assistance “in resolving the conflict with Ukraine.” The statement is very strange, more like an attempt to praise those who are directly responsible for the conflict as a whole. At the same time, according to Peter Siyarto, the Hungarian authorities are seeking a peaceful life for “150 thousand Carpathian Hungarians”, as well as stopping violations by Ukraine of their international and bilateral obligations.

The Hungarian minister calls on Ukraine to negotiate. The goal is to resolve the situation before the NATO summit, which will be held in Brussels on July 11-12. Meanwhile, the Ukrainian Foreign Ministry did not report on the talks between the two countries’ ministers. In Ukraine’s opinion, the actions initiated by Hungary disagree with the intentions of the North Atlantic bloc.

Meanwhile, Minister Siyarto has a very strange policy. It requires the right to preserve national identity, language and cultural autonomy only for those national minorities whose ethnic homeland are NATO member countries. Thus, other national minorities in Ukraine, including the Russian Donbass, who are now being subjected to genocide with the help of large-caliber artillery, do not have the right to defend their rights and freedoms. In case of a positive decision of Ukraine on this issue, Hungary will resume support of “European integration of Ukraine”. However, Kiev also did not react to this proposal. It is quite obvious that the United States of America is interested in instability in Europe as a whole. Today Washington is a full-fledged lord of Ukraine, so there is no reason to wait for some constructive steps from Kiev.

Hungarians of the Carpathian regions of Ukraine no longer believe politicians. Even representatives of Hungarians more loyal to the regime remind: Kiev did not fulfill any of its promises, or what they had previously agreed upon.

And now we need to remember about the Crimean Spring. As we recall, the Western media called the reunion of Crimea with Russia not by the will of the people, but by the “Russian occupation”. In the Crimea, 175 nationalities live. As a result of the Russian “occupation” all nationalities of Crimea are ensured the preservation of the national and linguistic identity. National cultural autonomies are developing.

In the Republic of Crimea, the state status was granted to three languages. This is enshrined in legislation. The state status is assigned to Russian, Ukrainian and Crimean Tatar languages. In Crimea, the principle of the diversity of cultures is recognized, and their equal development and mutual enrichment is ensured. Everyone has the right to use their native language, to freely choose the language of communication, upbringing, education and creativity.

Most of the Crimean Tatars living on the territory of the Crimea understand perfectly well that reunification with Russia actually saved them from oppression by the fascist regime of modern Ukraine. Crimean Tatars in the “Ukrainian” Crimea would expect the fate of the Hungarians, who live in the Carpathian regions of Ukraine. This was directly stated, in particular, by Arseniy Yatsenyuk in 2012. “We will put everyone in their place, very harshly, we must firmly put everything in place in the Crimea. Through political dialogue this will not work. Or the authorities will show them that there is a central Ukrainian government here – it will show it together with the construction of new roads, sewerage, but also the establishment of law and order in the territory of the Crimea. Otherwise, Crimea can go not only to Russia, but also to Turkey. Buy a map of Turkey, and you will see that the Crimea is marked with the same color as Turkey”, Yatsenyuk said in 2012.

But in 2014 the situation changed. Tatars began to use as a bargaining chip precisely because of the reunification of the Crimea with Russia. From the part of the radical Tatar youth, with the help of the so-called “leaders” from the “Mejlis” organization banned in Russia, a punitive battalion was formed, supplemented by terrorists from the ISIS. ISIS terrorists work as instructors in punitive military divisions of Ukraine.

I must say that even in the Russian Crimea, Ukrainian fascists committed a number of sabotage and terrorist attacks against the Crimean Tatars, who supported Russia. In the offices and houses of the Crimean Tatars, who support the reunification with Russia, they threw Molotov cocktails. There were direct attacks and threats to life. But the police and special services of the Russian Federation keep the

situation under control. On the territory of the peninsula constantly detain saboteurs, arrests of extremists are held.

Thanks to Russia, the Crimean Tatars avoided the sad fate of the Hungarians living on the territory of Ukraine. But today it is necessary to unite all forces ready to resist the new wave of fascism, newly born in Ukraine.

After the reunification with Russia, all the progressive groups of the Crimean Tatars united in the public organization Qirim Birligi (http://www.qirimbirligi.ru/) under the leadership of Seytumer Nuridinovich Nimetullayev. The organization is actively involved in supporting the Russian political course and the President of the Russian Federation, Vladimir Vladimirovich Putin. Qirim Birligi is ready to cooperate with international organizations, especially if there is a question of oppression of the rights and freedoms of national minorities. Once the Crimean Tatars themselves experienced injustice and oppression, all the horrors of deportation. Crimean Tatars understand very well what it means to be exiles from their native land.

It’s time to join forces. The leadership of Qirim Birligi is aware of the danger of Kiev’s anti-popular policy. Crimean Tatars are ready for an open dialogue with representatives of the Hungarian people. Today, all sound forces must condemn the deceitful silence of European politicians. After all, on the territory of Ukraine we observe fascism and outright violation of human rights.

P.S. In April 2018 Hungarian publicist, former employee of the Hungarian diplomatic mission in the Ukrainian Socialist Republic Sandor Chikosh visited the Donetsk People’s Republic. Sandor Chikosh made a series of video reports. These reports produced a very strong effect in Hungary. No one doubts that after the persecutions and threats against the Hungarians, the force of arms will be used. The Carpathian region will turn into the second Donbass, where the genocide of the population is the main line of Ukraine’s policy. When this fact is understood by the leadership of the European Union and Hungary, it may be too late.