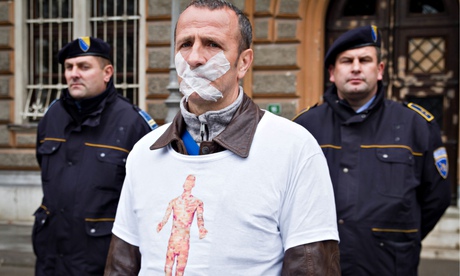 Demonstration in front of the presidential palace in Sarajevo, Bosnia and Herzogovina, 23 February 2014. Photograph: Aurore Belot/Demotix/Corbis

We are extremely concerned by the response of the international community to the popular protests that have erupted against almost two decades of misrule in Bosnia and Herzegovina (Editorial, 17 February). Western media and politicians have argued that now is not the time for the western powers to disengage from Bosnia.

In fact, it is time to recognise that external rule in Bosnia has failed. The Dayton agreement in 1995 set up an undemocratic “protectorate”, giving the high representative of the western powers neocolonial authority over a political system that has institutionalised ethnic divisions, while neoliberal economic policies have impoverished ordinary Bosnians regardless of ethnicity.

Do the western powers have any answers to this crisis? The high representative, Valentin Inzko, can think only of threatening military intervention. Periodic threats by the US and the EU to revise the Dayton agreement by recentralising Bosnia have only made matters worse, raising the spectre of secession as Serbs and Croats look to Serbia and Croatia for support. And neither Brussels nor Washington will contemplate reversing the neoliberal economic policies that have impoverished so many.

It is therefore time to terminate the office of the high representative and end outside meddling in Bosnian affairs.